The real history of Churros 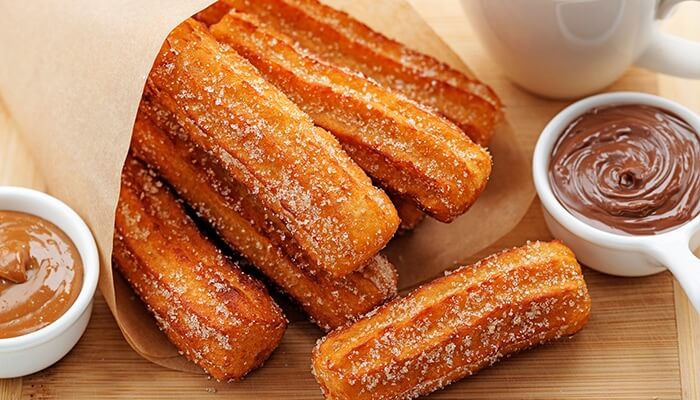 Churros are a delicious food that is cooked in many countries worldwide, from Spain to Latin America and the Philippines.

Thanks to its easy preparation, this fried dough has become an ideal companion for snacks and quick meals. However, despite its spread consumption, few know its true origin.

Therefore, let’s travel through history to learn about the origin of Churros and the reason for their curious name.

Are Churros of Egyptian origin?

Preparing a churro is really simple because few ingredients are needed: dough, water, sugar and oil. That is why it is common to find theories of its origin in different places. According to one of these theories, Churros already existed in ancient Egypt.

This historical explanation is due to different engravings found in the tomb of Ramses III (1184-1153 A.D.), of which only some drawings are preserved, since the originals were lost in the excavations. Those engravings portrayed different workers processing the wheat, and then making a dough, rolling it up and frying it.

This explanation about the origin of Churros is quite plausible since, nowadays, it is possible to find ancestral dishes in Middle Eastern countries (such as the mushabbak prepared in Lebanon), which are closely related to the preparation made by the Egyptian people.

If this theory were true, Churro would be a particularly old dish, no less than 3,000 years old!

The Chinese also claim to be the parents of Churro

Another widespread theory points out that Churro originated from the popular youzhagui (demon fried in oil) or youtiao from China, which is a typical breakfast dish in that nation that consists of a fried dough, but not sweet. Instead, salt is used in its preparation. This dish is extremely popular in southern China and is usually eaten with milk, although it is also served with consommés.

Some accounts without much documentation say that Portuguese merchants brought this recipe to the Iberian Peninsula, where they exchanged salt for sugar, and a piping bag was introduced to spread the dough. However, it is also possible that this preparation reached Europe during Marco Polo’s travels.

In any case, there is no agreement or historical record that allows to verify these theories.

A truly Spanish origin for Churro 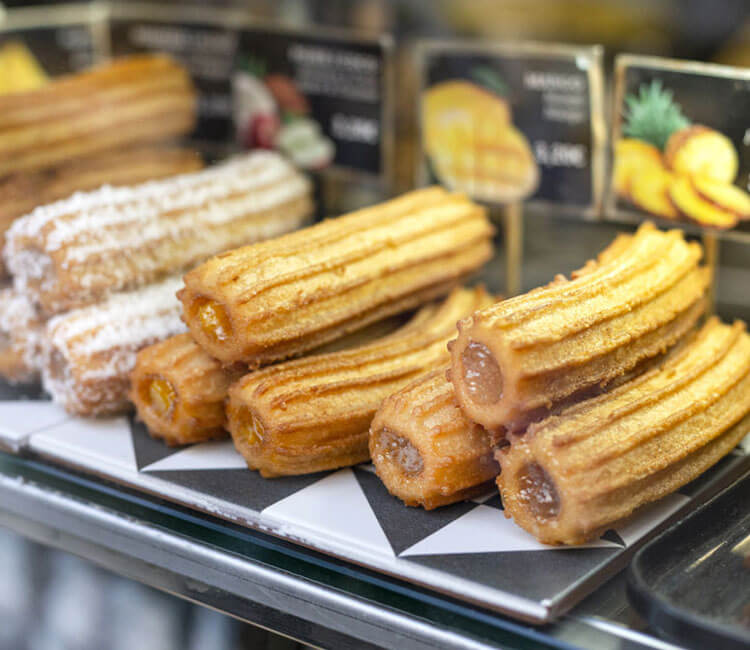 Regardless of its remote origins, it is quite likely that Churro had an autonomous origin in Spain because of its easy preparation and the few ingredients it needs. It is likely that the Iberian shepherds, faced with the impossibility of accessing an oven during their long days, have chosen to fry the dough as a way of making a fast food similar to bread.

This custom was so well received that by the Middle Ages it is possible to find Spanish records from the 16th century, where a recipe book of Elizabethan nuns or Poor Clares of Valladolid referred to a preparation of fried flour and sugar. Likewise, it is possible to find indications for its preparation in recipe books of royal cooks. That is, it was a dish for rich and poor alike.

Likewise, it is widely documented that soft drinks and food were sold on the streets in different areas of the Spanish Empire during the 17th century, using small ovens and frying pans to sell products. In fact, at that time in Spain, a type of fried dough known as “fruit of the frying pan” or simply “fritter”, which was sweet, was particularly popular. It was also quite common to consume it at rural fairs and popular events.

Finally, Churro factories began to be established in towns like Zaragoza by the XIX century, where they were prepared with the star shape with which it is known today, beginning its process of conquest of all Spain, Latin America and other regions of the world and continuing its process of expansion until today.

The origin of the word Churro

This peculiar name derives from a sheep or goat native to the Iberian Peninsula, such as the churra sheep, which is typical of Castile and Leon. Apparently, the similarity between the horns of this animal and the food was such that this name was eventually adopted.

On the other hand, Churro has been acquiring different shapes, from a rigid and elongated one, to a soft and small one. There are also thick Churros that allow their filling and very thin ones covered with chocolate. But regardless of their shape, size or thickness, their preparation based on fried wheat flour and their elongated star shape will always be their distinctive to carry the name of Churro.

The history of the churro and its conquest of the world

Upon the colonization of the Americas and other regions of the world, such as the Philippines, by the Spanish Empire, Churro became part of the meals and customs of each locality, and after its contact with America, Churro would meet its most usual companion, chocolate.

The relationship between Churros and chocolate is almost inseparable, either in a cup or as a filling. However, this combination is not exclusive, because sometimes Churro is also accompanied by milk sweet (or “arequipe”, as it is known in Venezuela), guava candy or even ice cream of different flavors.

On the other hand, the popularity of Churro does not stop nowadays and they are beginning to be very popular in markets like the Asian one. For example, its consumption is more and more common in countries like Thailand or Indonesia, to the point that this dish is popularly known as Spanish doughnut in Indonesia.